In part 1, we discussed how to set up semantic-release and react-native-version. That covers the first part of the deployment flow from commit to GitHub. In this post, we’ll take a look at the configs for verification and deployment. The CI configs shared in this post are for Circle CI, but the workflow can be applied to any CI. A working example repo can be found here. Here’s what we’ll cover: 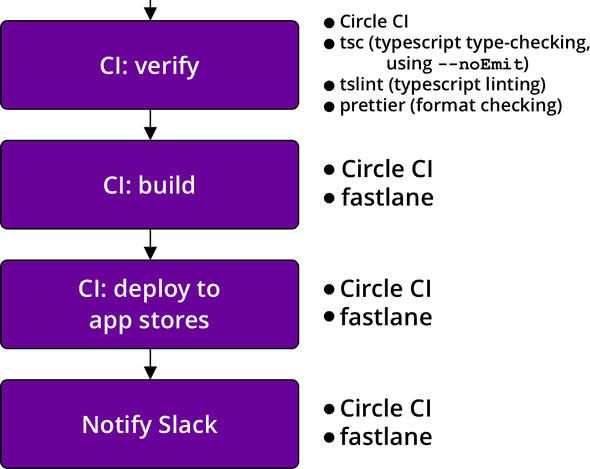 Disclaimer: this might be hard to set up from scratch. It will be easier for those with existing projects to migrate to this workflow and make changes where things are different.

The purpose of this verification step is to run some sanity checks, not to run the full test suite. That should already have been done using the same package on the previous commit. The only changes to the package should be the version number edits, so we run some simple linting checks and perhaps the unit tests.

We also want to keep the deployment as reliable and fast as possible. If you have experience running integration or e2e tests for React Native apps in CI, you’ll know that “reliable” and “fast” are usually not words used to describe those types of tests, especially when running tests for both iOS and Android on multiple supported devices.

Here’s a sample config for a simple job that installs node dependencies, lints, runs unit tests, and saves the workspace for later use. We’re using yarn here, but if you prefer npm, swap yarn.lock with package-lock.json and edit yarn commands to use npm run.

There are lots of unit test setups so I won’t cover that here, but I will share the way I lint TypeScript files. It took a few iterations to keep type checking, linting, and format checking under 10 secs. The answer was to use concurrently. The three tasks do not need to run in sequence, so we can save time by running them all concurrently.

Your .prettierignore file should include node_modules/**, ios/**, android/**, and any other files you don’t want to check. Also note that this lint task is not meant to be used on commit. For something like that, you’d only want to check staged files. precise-commits is great for checking prettier formatting on changed files.

Why fastlane in CI?

Setting up fastlane in CI rather than using it on a local machine has several advantages. One advantage is idempotent builds. The environment in which the apps are built will be the same each time, which provides some peace of mind when combatting build or deployment problems. Once it works, it’s repeatable. That’s not to say it’s not challenging to set up, but it’s worth it.

Once upon a time, I deployed from my local machine without running npm install. I ended up delivering versions of node modules I was using on another branch. Needless to say, I had to release all over again. While there are ways to prevent that on a local machine, deploying from CI guarantees various problems like that don’t happen.

Another advantage is that CI can run the deployments to iOS and Android concurrently. If you ran them on a local machine, you’d probably run one, wait for it to finish, and then run the other, which takes more time.

Finally, running fastlane in CI allows any team member to deploy the app as long as they have the permissions to create the tag. No additional setup required, such as setting up environment variables or accessing Google Play release credentials that shouldn’t be committed. All of it is in CI environment variables.

Setting up fastlane in Circle CI

fastlane is pretty much the standard for automating beta deployments of iOS and Android apps, so I expect you’ve used it before or at least familiar with it. But even if you’re not, the fastlance docs do a good job of explaining first-time setup. I’ll try to cover what’s relevant to setting up fastlane for Circle CI, but make sure to set up fastlane/ folders in both the ios/ and android/ folders. You can do that by running fastlane init in each folder. It’s not completely necessary to do it this way, but I find it simpler and much more readable to keep the configs separate. The fastlane configs shared below will assume this directory structure.

This setup allows us to have separate fastlane folders for iOS and Android, but still share gems and manage them with a single Gemfile.

Add vendor/ to your .gitignore.

Now run bundle exec fastlane init in both the ios/ and android/ folders. Using the manual setup option will allow you skip some steps and just get the necessary files in place. We’ll be editing the Fastfile in each folder. 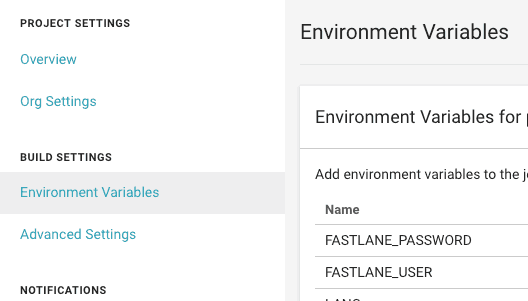 Here are all of the Circle CI environment variables that we’ll be setting:

Follow the docs for setting up supply for fastlane. That will walk you through the process of generating the Google Play credentials JSON, but rather than committing that file to the repo, we’re going to convert the JSON to a string and add it as the GOOGLE_PLAY_CREDS_JSON environment variable. Respect 12-factor! :)

As a front-end dev, my homebase is the browser console. Open one up and copy the JSON.

That will remove newlines and give you a nice, single-line string for CI (and local environments for testing). Circle CI does not strictly require this, but I’ve found it useful for other CIs and for adding environment variables to my own .bash_profile. After pasting, add this reference to your Circle config.yml:

This will write the JSON to a file so it can be read when fastlane builds. The JSON is not logged to the CI logs. Add android-developer-creds.json to your .gitignore.

ANDROID_KEYSTORE, ANDROID_KEY_ALIAS, and ANDROID_STORE_PASSWORD are used to sign the Android release. I use the same password (ANDROID_STORE_PASSWORD) for both reading the keystore and signing. Some frown upon this, and you’re free to make them separate passwords and separate environment variables. Consult the android developer docs to set up Android code signing.

The important issue for us is the way we store the binary .keystore file as an environment variable. The best solution I’ve found is a bit fancy: encode the file using base64 and then decode it in Circle CI on-demand.

Once you’ve followed the android docs to generate the .keystore (or .jks) file, run this command:

Copy this value and paste it in Circle CI environment variables under ANDROID_KEYSTORE, then add this reference to your Circle config:

This will decode the value and add .keystore files in both the android/ and android/app/ folders, which is necessary later.

The >/dev/null at the end is important or the keystore will get logged in the CI logs. If it’s a public repo, that would defeat the purpose of all this.

Here’s the Circle config for the deploy job:

The deploy job reuses the workspace we created in part 1, rather than re-installing node modules. Android gradle dependencies and ruby gems are given their own caches for faster subsequent builds. The key creation references are used once dependencies are installed.

The environment is already set up for this to work. You can change the track to any track you like, but I usually start with alpha on a new project and then later upload directly to the beta track once the app is more mature. Test the build with bundle exec fastlane assemble_build from the android/ folder.

First, here’s the config for Circle. Replace $PROJECTNAME with your project name.

We can’t re-use the workspace created in the verify job. This is a limitation of building the iOS app on Circle CI and one reason why iOS takes a little longer than Android. Fortunately, we can still cache the node modules so it’s not a total loss.

Double check that the XCode version is the one you want.

The pain point for iOS is going to be code signing. It’s pretty much always the pain point for iOS no matter how you deploy. Circle CI has decent docs for setting up code signing for iOS projects so I won’t duplicate that here. It will take some time to set up and likely require some trial and error, so be patient and don’t get discouraged. You’ll be setting up fastlane match and turning off Automatic Code Signing in XCode.

When you get code signing working (test with fastlane assemble_build locally), don’t forget to set these environment variables in Circle CI: FASTLANE_USER, FASTLANE_PASSWORD, and MATCH_PASSWORD.

Replace com.org_example.example with your project name and double check the name of the provisioning profile. I’ve used "AppStore" here.

Also replace $PREFERRED_SCHEME with the right build scheme (this is usually just the project name).

We’re using the iOS Fastfile to send the Slack notification. This is because iOS will always take longer to complete than Android due to the nature of iOS deployments. You could post a notification for both, but I just post one when both are done and assume iOS will take longer.

Why is it safe to assume that? App Store Connect processes the app before allowing the app to be tested in TestFlight. You can opt to skip waiting for processing in fastlane, but then fastlane can’t notify the testers for you. The app isn’t usable in Testflight until processing is completed anyway, so I suggest waiting.

Have a look at the slack action docs. Create the webhook on Slack’s website and add that URL to the Circle CI Environment as SLACK_URL.

If you don’t need the slack notification, you only need to remove that line in the iOS Fastfile.

Putting it all together

We’ve covered a lot, and it doesn’t all work yet. The final piece is to set up the workflow in Circle’s config.yml so things actually get trigged after pushing to GitHub. Here we go:

I’ve found it useful to have separate branches for deploying either android or ios on its own in case of errors. For instance, say android failed but iOS succeeded. You can keep pushing commits to deploy-android until it succeeds without changing anything else. I expect this will happen for you a few times in the beginning, but should happen less and less with experience as you work out the kinks.

Congratulations! If you’ve made it this far, you have a robust, single-command deployment process from commit to app store. TestFlight and Google Play have updated versions, GitHub has the release notes, Slack has been notified. All with one command: yarn release or npm run release.

With this setup, the deployment for my most recent app takes about 8 minutes 2 from the time I run the command to both apps being available in the app stores. Your deployment time may vary depending on package size, but I suspect this will be an improvement over your current workflow.

If you have questions or suggestions on how this workflow could be improved, I’m available on Twitter.